As virtual assistant products have developed and are becoming more common, the accommodation for the disabled community using this technology, however, does not grow at the same pace. Building on top of Alexa, the flagship virtual assistance by Amazon, the modular adapter is a device that bridges switch control devices and appliances to Alexa, so that they could be used with ease using voice commands.

The development of the device was built using two frameworks that had to work congruently with each other. Those would be the Raspberry Pi and Alexa Voice Service SDK (AVS SDK).

The Alexa Modular Adapter is created with the primary goal of improving the quality of life for those with physical disabilities. In general, our product allows user to control common switch control appliances using voice command, in other words, we are the devices more accessible by making them smarter. And because the target consumers are people with disabilities, the adapter can be setup and used within minutes right out of the box with our smart appliance identification method. 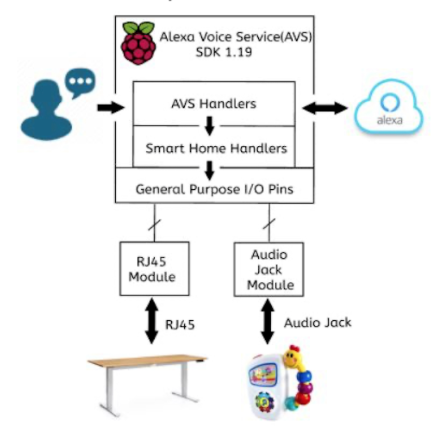 One of the most important aspects when designing a product is improving the experience for a user to set up your product. With the modular adapter being catered to people that might have a wide range of disabilities, this takes another level of importance for us. For the modular adapter, the main obstacle to get the product up and running is connecting the device to the WIFI. For the Alexa on the product to function, it needs a constant connection to the Alexa Cloud to process requests.

To deliver this solution, the product comes with a feature to set up the WIFI with only using voice. We the tool SNIPS to make it possible for the user to look through possible WIFI hotspots, select one of those hotspots, and enter in the correct password in order to access that hotspot.

The modular adapter is able to do the following:

It can rise and lower a motorized table in response to voice commands from the User.

It is also can turn on/off a musical toy in response to voice commands from the User.

It can also change WIFI hotspots using only voice commands from the user.

With the progress made with the Modular Adapter as a prototype, we are hoping that this prototype shows that designing a device like this is not only possible but fruitful in the marketplace.

We would like to thank the following people who have been a great help to this project.
The Alexa for Everyone Team
Amazon liaison, David Frerichs
Sarah Ca
TA Arindam Sarma
Professor Richard Jullig