Students & faculty at UCSC require accessible, reliable, and accurate information to create an efficient schedule for moving around, and off (to/from) campus.

We aim to provide an integrated bus tracking system that will be accessible to all campus bus users. Bus Tracking System 3.0 (BTS3) will address the cost issues encountered with the previous systems, create a scalable maintenance plan for TAPS, and add an Estimated Time of Arrival (ETA) feature at major bus stops.

Our Product Compared to Competitors

1) Compared to off-the-shelf tracking systems such as GMV
Syncromatics, our system is:
a) Cheaper
b) Without monthly fees for cellular service
c) Equipped with a route sign
2) Compared to Bus Tracking System 2 (BTS2), our system is:
a) Cheaper
b) Compatible with all types of campus buses
c) Easier to implement
d) Longer lasting
e) Properly documented (Technical and user manual for TAPS)
f) Equipped with an ETA feature 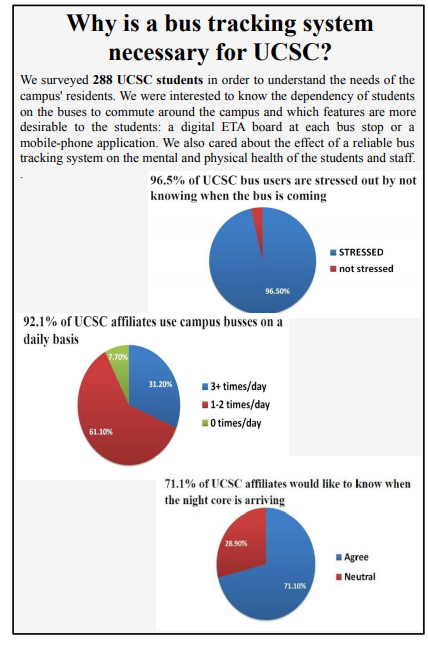 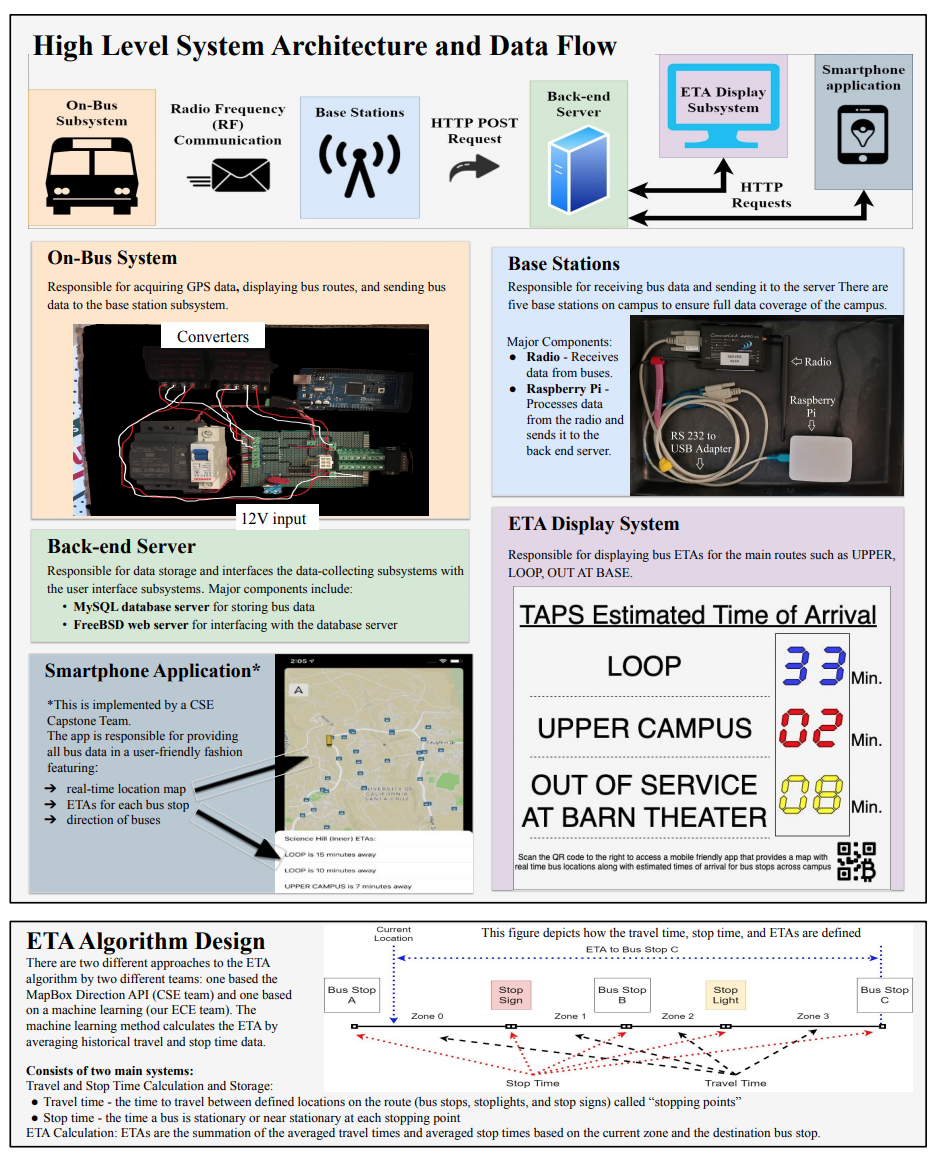 On-Bus System Improvements to BTS2:
● The system now operates on a 12-V power system, allowing us to include bike shuttles and cutaway buses used for the night core route.
● The route sign cost decreased from $800 to $92.21+labor cost, while still providing the main routes:
LOOP, UPPER, BASE, CORE.
● The tracking part of the system now operates independently from the route sign. This feature is important for buses that do not need a route sign like the bike shuttle

Base Station Improvements to BTS2:
● The system no longer uses any custom parts, allowing for easier installation and maintenance for the system.
● New micro SD cards have been chosen for the Raspberry Pi to increase the lifespan from 4 years to an estimated lifespan of more than 4 years.

Addition of the ETA Display System:
● The ETA display retrieves ETA data from the web server via WiFi.
● The ETA display can display 3-5 different routes, which can be changed by the client via the web server.
● ETA colors change from blue to yellow to red as the ETA counts down to indicate approaching buses. The three colors are distinguishable for people with any of the four types of color vision depicted in the left figure below. Arrows indicate the selected colors in each color wheel.
● If the system disconnects from WiFi, the timestamp of the disconnect is logged in the web server and a red ‘X’ is set on the ETA display

Addition of the ETA Algorithm:
The framework for the algorithm is implemented in web server and is currently collecting travel and stop time data from the BTS2 system.
Proposed ETA accuracy specification was not met, but the accuracy will improve over time, as more data is collected.

Each system within the BTS3 design was successfully constructed according to their respective requirements. However, due to limited access to UCSC
campus, we were unable to do the full system field testing. A Standard Operating Procedure (SOP) along with the Technical and User Manual will be provided to TAPS for future testing and implementation.

We would like to thank you the following people for their help:
• Kerry Veenstra, developer and implementer of BTS2
• UCSC Transportation and Parking Services (TAPS)
• Tela Favaloro, Stephen Petersen, Azzam Quresh