The increased usage and integration of the internet for all tasks large and small has led to an increased concern over security. A Virtual Private Network (VPN) provides a secure connection for users to help address these concerns. Wireguard is a new VPN protocol that promises a smaller codebase and stronger performance. We have used this VPN protocol to develop our own connection manager microservice that will route users to servers and provide each user an isolated namespace. This ensures the security of a VPN connection while making configurations simple for customers.

The connection manager is an intermediary that passes the client’s information  to any of the Wireguard servers that it routes to. It then spins up a VPN interface that  the client can use to establish a connection.

Once a server is chosen, the manager generates a per session Wireguard key and sends a POST request to the server.  The server creates a new interface for the user. The connection provides an isolated environment for the user on the server using Docker containers. These containers are all run on separate ports so that multiple users may connect to a single server. Each server has a teardown protocol that will remove any interfaces that are no longer in use by a client.

The client service can configure an interface using the response returned by the Connection Manager and make a connection to the server. This process streamlines a connection using only one command.

Cisco Umbrella is the division of Cisco focusing on cloud security. Their domain encompasses many products such as DNS-layer security, and a cloud delivered firewall. One of the products they provide is a cloud-based VPN service.

A VPN is a common network security construct that protects a user’s traffic as it travels across the public internet to its destination. It acts as a trusted intermediary between a computer and the internet and securely encrypts all traffic sent between the user and the VPN endpoint. This prevents attacks such as traffic snooping and interception because all the user’s traffic appears to be sent only to the VPN. Its actual destination or content cannot be determined.

We investigated Wireguard on behalf of Cisco Umbrella which hopes to develop a new VPN service based on this new protocol. We created a VPN connection manager that uses this new protocol as a prototype of this new architecture. 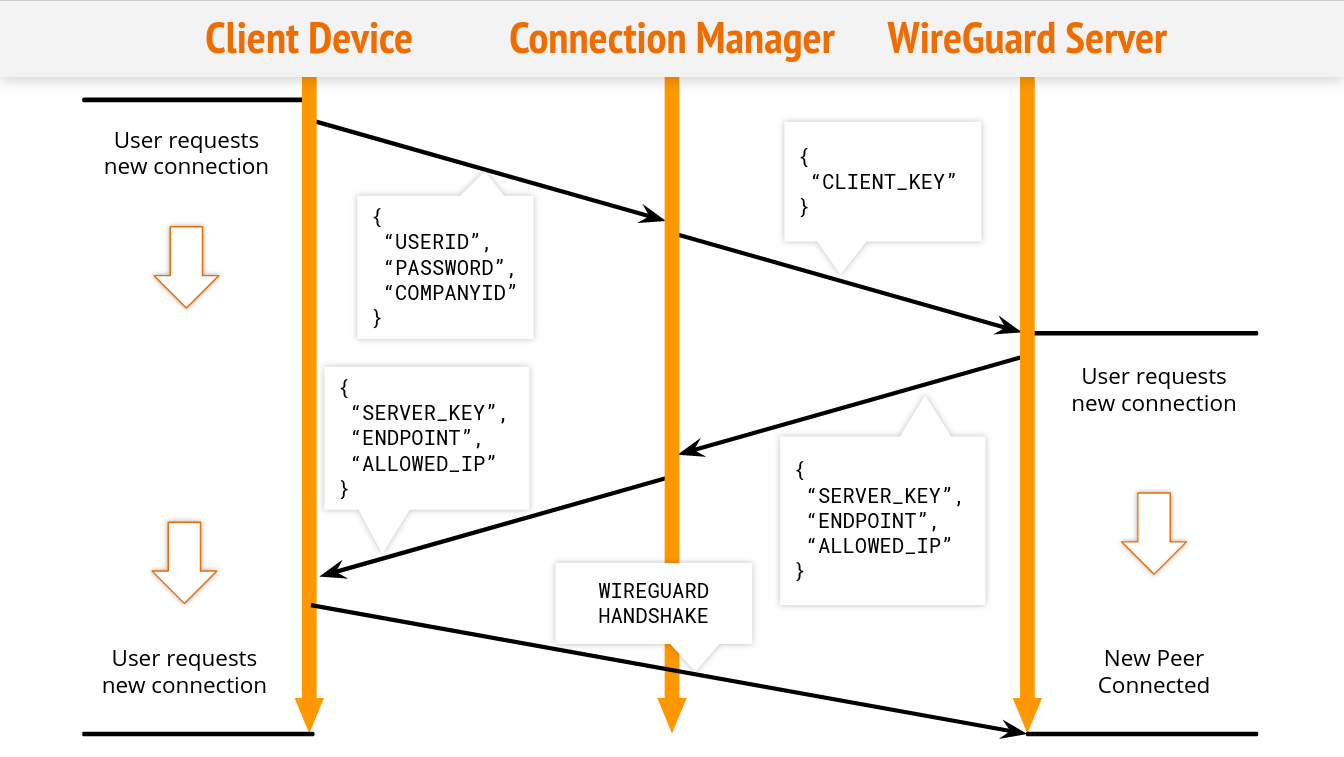 Wireguard Go implementation had issues spinning up and running a connection.

Boringtun implementation was implemented successfully on the client. However, we chose Wireguard Linux due to our familiarity with it after using it for the VPS component

We were able to successfully create a VPN connection manager for multiple simultaneous users that can route to multiple servers. This was tested with up to 3 servers. Users are authenticated with a username and password, have persistence in our database, and can use a single command to initiate a new Wireguard connection.

We realized during the project that the architecture we created cannot run easily on commercial cloud platforms. This is because the VPS module requires kernel level access to networking APIs that are not always available in virtualized environments like Google Compute Engine.

Given more time to work on the project we would like to condense and combine some of our components and redesign the VPS service so that it could be deployed more easily.